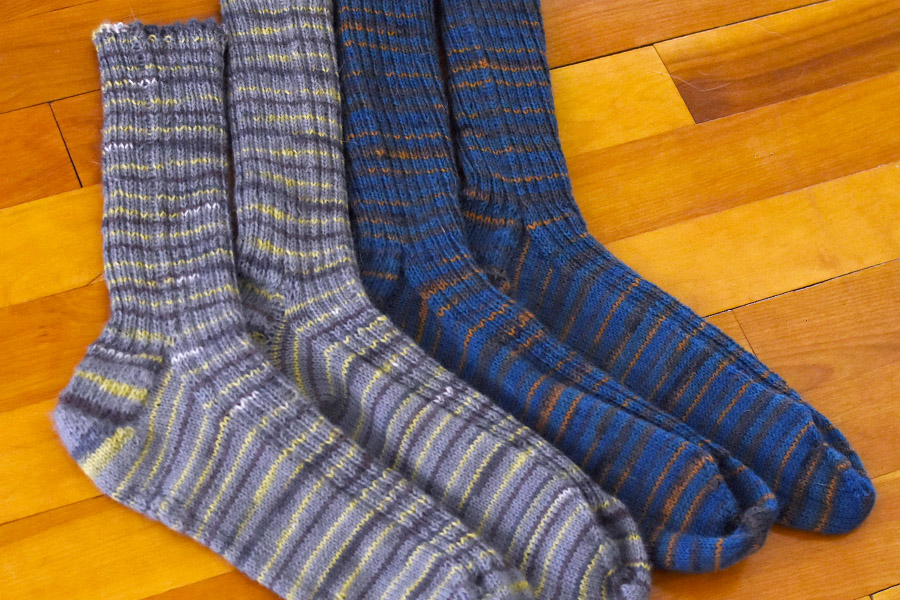 When I started knitting, the one thing I really wanted to make was socks. To me, socks are the perfect knitting project. They are useful. They make you feel good by keeping your feet warm on a cool day. And they are small – so a project can be started and completed pretty quickly. That’s a lot of satisfaction from a single crafting project.

After learning on the requisite scarf, I purchased a pretty sock pattern, acquired yarn and a set of circular needles and set to work. The results were frustratingly catastrophic. The stitches were so small. The pattern was complicated. And the knitter… well, my skills just weren’t up to the task. My second project became my first to be sent into hibernation. I turned my attention to a project that required less dexterity and experience.

Still, I couldn’t shake it. I truly did want to knit up a pair of socks for myself. Which is why, when Crafter Companion Angela unveiled her new “Simple Ribbed Socks” pattern I was the first tester to volunteer. “What would be a better test of a simple sock pattern,” I offered, “than someone who has tried and failed at the task in the past?” The team agreed. Why not? It’s neither their time nor yarn invested. Let’s see what I can do.

I’m happy to say, I did quite well.

I purchased a skein of Lion Brand Sock-Ease in Rock Candy. There are so many things to love about this yarn. One 438 yard skein is enough to knit two adult socks and costs $10 or less. The yarn itself is soft to touch (it’s advertised as being finished with Aloe Vera to make knitting and crocheting comfortable), yet felt very durable during knitting. My tendency to split the yarn fibers while working was definitely less frequent than when working on other projects. And the Rock Candy colors make me smile. It has a general base color of grays, brown, and green, with an occasional abbreviated stripe of yellow. And, just enough to keep things interesting, there will appear a short fleck of white for a few stitches.

Another benefit of the color for relative rookie knitters like me is that the subtle color changes from row to row helped me keep track of where I was in the pattern – particularly if I found myself needing to tink back a few stitches.

Yarn Crafter’s “Simple Ribbed Socks” pattern is – without a doubt – the most fun I’ve ever had knitting. It’s a perfect balance of challenge and simple knitting pleasure. I think it comes down to the fundamentals of how Angela created the pattern. To begin, the predominant stitches are simple knit and purl. Much of the time on this sock is spent knitting two, then purling two. Pretty easy. Another great thing about the pattern is that there are a lot of little landmarks along the way. These serve two purposes that I believe will help newer knitters working with this pattern.

First, you have plenty of points to check your work frequently. Due to my tendency to make mistakes (and the frustration of then trying to undo these mistakes), I double-check my work by counting stitches. A lot. Working through this pattern, I would arrive at a stitch marker and could pause to make sure I was where I was supposed to be. Commonly, I’d have to count 16-20 stitches. Not so many. And if I had happened to be in error, it was likely somewhere in the previous 10 stitches or so, making it really easy to get back on track.

The second thing that makes these frequent landmarks handy is that I was able to pick up my work and knit for 5 or 10 minutes, then land at a spot that would be easy to pick back up later. This made me much more likely to pull out the project and make a little progress whenever the urge struck. I didn’t feel like I had to sit down and commit to a knitting session. Just chip a little away.

There are basically six main stages to the “Simple Ribbed Socks” pattern. You begin with the cuff and simply knit and purl in a circle until you achieve the desired length (9”, in my case). No counting and tracking rows; just knit until you get there.

Then there is the heel flap, which seems like it would be a lot more technically challenging than it is. All I did was follow the steps for each row and before I knew it my cuff now had a flap on one edge and a stitchholder on the other.

The lore surrounding turning a heel on socks had me pretty intimidated. When I expressed my trepidation to Angela, she said, “It’s not hard. Just follow the steps and work one row at a time.” I did. And I couldn’t believe it. This funky little triangle shape appeared like magic.

The next step is to tie the heel sections back to the main area through the knitting of the gusset. There are a couple of knitting tasks of which I’m not a huge fan. Weaving in ends. And picking up stitches. This required the latter. A little bit of YouTube and a bit of counting and planning was all it took, though, and suddenly I was back to just knitting row after row. This section has some decreasing to include, but that, too, helped keep things interesting. Again, just challenging enough to ensure I wasn’t bored with the project.

The final two main sections are the foot (which is pretty much like the cuff – just keep knitting the pattern until you reach the proper length; no tracking necessary) and the toe, which feels so much like the finish line that it seemed to me I blinked and the first sock was done.

Of course, I wasn’t done. I was only halfway done, seeing as how I have two feet and all. But here’s the thing – just as I had heard heel-turn horror stories, I had also seen many references to “second sock syndrome.” You know, where you’re just kind of over the whole project, but you still have one more to do? But that didn’t happen. This pattern was so much fun to do that (after showing off my one-socked-foot to whoever was near at the time), I immediately started casting on the second.

And when I finished that sock, well, I grabbed another skein and knitted another pair. That’s how much fun these are to make.

A copy of the “Simple Ribbed Socks” pattern
will be available in the next release update of the Yarn Crafter app.